This month has been a particularly tiring one. We moved into our new apartment together, so we're still adjusting to all the changes, and we're still trying to find everything that we can't find since then. Like console memory cards.

With this move, however, we finally have a real home office! We both got new desks and lamps, so hopefully our persistent back pain and eye strain will go away. One day. One day soon. Please.
While Geril got himself a regular desk, I opted for an adjustable standing/sitting desk. So maybe the back pain will turn into leg muscles. Who knows. It's good to have the option of standing up while working, anyways.

In other news, we've been working on a massive background-crowd system. You know how in war scenes you have to show large crowds marching forward, or running into the enemy? That's what we're working on, but inside Unreal 4.

We already had a smart crowd system that could react to other crowds and even initiate combat with each other, but no computer could handle rendering 10 000 of those soldiers all at once in Unreal. So we made a simple crowd that can only march forward at various speeds and follow the terrain's slope. For this purpose, we decided on creating 3-frame 'animations' for characters: 3 static meshes that would alternate while marching, like a flipbook. These static meshes don't strain the engine so much, so we could easily show more than 10 000 of them, while also giving the crowd the illusion of being animated.

The static meshes had to be heavily simplified for LODs, and Geril did all of that by hand. This is what our simplified horsemen's LODs look like: 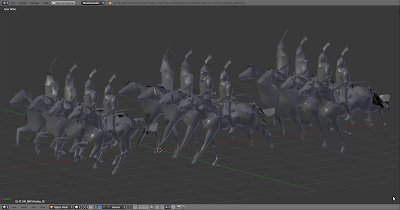 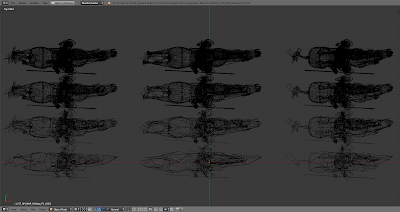 So, that was our approach for creating a very light crowd in Unreal 4. Would you do this differently?

Until next time!
Posted by Lussy at 10:04 No comments: Links to this post

On this blog you will find information about our video game projects. We're two people working on games that we want to make as high-quality as possible.
We post updates of our progress at least once a month. You can check out our IndieDB page, or go to our Sketchfab gallery to take a look at our in-game models!
Previously we were known as Team OL.